Sandstone arches, sand dunes and ancient rock carvings from the back of a camel

What a night! A little tip for those of you who are considering a small investment into a new set of beddings – camel hair does not make for a good night sleep. Although judging by its wiry quality, it is probably an excellent building material. 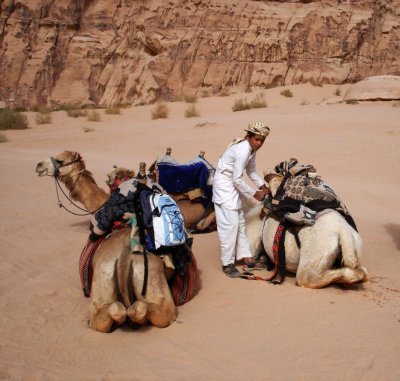 Now I am all up for an authentic experience, but if I was to say I enjoyed spending the night under a rock hard blanket with its organic filling trying to escape through every available opening in the cloth, I would be lying. Having said that, lying in a Bedouin tent in the middle of desert, listening to the relaxing sound of the wind, only occasionally disrupted by a cacophony of snorts from neighbouring tents, was priceless. So much so, that when it was time to leave in the morning, we couldn’t help feeling sad that this part of our Jordanian trip was over.

Waving good-bye to all those great people we chatted to the previous night and during breakfast, we hopped (ahemp ahemp) on our camels and after a customary photo shoot for everyone in jeeps, we rode into the distance. I deliberately don’t say ‘into the sunrise’, as once again, there was no sunrise. Although the illuminated morning clouds suggested sun was somewhere out there and it won’t be long, before it makes an appearance. 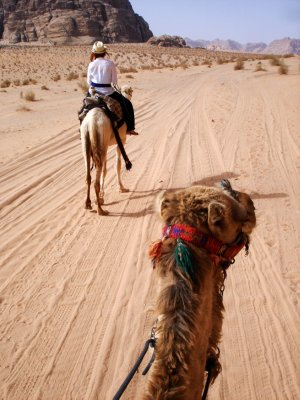 Feeling confident after our camel-riding ‘successes’ from the previous day, we bribed Yusuf into lettings us take control of the camels once again. This he was only happy to do and within minutes, our orderly procession changed into a disarray of movements. Still, somehow we all kept moving in broadly similar direction. Compared to Yusuf however, who was filling his time by perfecting his camel dressage technique, the Duke and I were in control of our camels only as far as we were happy to go wherever they wanted to.

Despite having just left a busy camp, it didn’t take long before we disappeared behind a shapely sandstone mountain and as far as we could see, there was noone else around. This in fact, lasted for several hours and so it was only around lunchtime, when we saw a trail of sand-cloud in the distance, suggesting we were not alone.

It is very hard to describe the tranquillity and peace that one feels when walking through the desert, surrounded by ruggedly unspoiled nature. In the absence of noise pollution and visual overstimulation, our senses start to open up and our mind slows down to take in more of the surroundings. 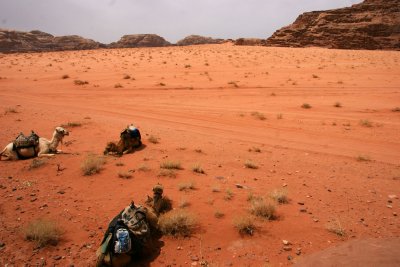 Perhaps the only obstacle to complete relaxation at this moment can be an increasingly uncomfortable friction between your lower back and camel-saddle.

Yusuf has done a great job finding a spot for a pre-lunch break, and so after a few hours riding, we climbed up on a rock plateau with splendid views of our fidgety camels and still surroundings. It was clear that our programme for the day was not that packed to demand continuous movement and so we kicked our feet up and stretched on the heated rock for a little break. 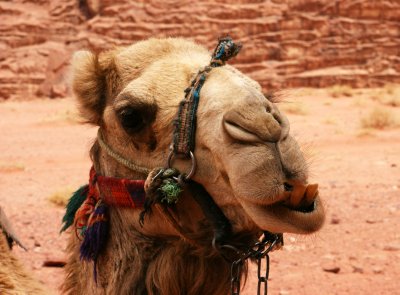 Feeling refreshed and ready for some more action, after an hour or so we (Yusuf) summoned our camels and continued on our way. Although the landscape of Wadi Rum is fairly uniform, we were enjoying the slight changes in rock formations, watched animal tracks in the sand and entertained ourselves by listening to Yusuf singing. Our constant attempts to keep the camels on the straight and narrow, however, must have looked exhausting as Yusuf soon decided we needed another break. Never mind that less than an hour passed since our late morning nap and from where we were standing, we could still see the flat rock of our previous stop.

Having said that, it took the best part of an hour and just about every vegetation in the surrounding area before I managed to get my camel to sit down. By then, I was positively hungry and our lunch break timing seemed about right. 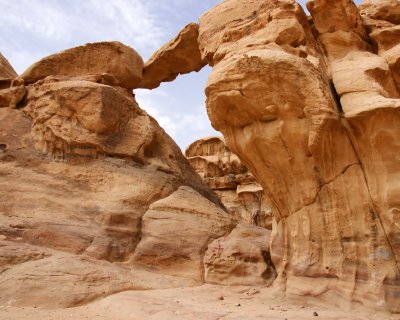 By now we were versed in the midday routine. Yusuf busied himself by making fire, whilst the Duke and I found a shady spot by a rock mountain and did nothing, until it was time for lunch. The only thing that somewhat spoiled the whole experience was a desert spider which made his way into my hair.

The Duke did his best to retrieve him whilst trying not to look squeamish, which didnt quite work as designed. When I gently probed into ‚why the f**k did he not simply pick the spider with his hand to spare me ten minutes of being poked in the head with various home-made spider retrieving tools, I learnt it was a preventative measure as we didnt quite now how poisonous the spider was. Now, I might not be a spider expert but being poked and chased around in long hair for an extensive period of time does not exactly strike me as calming. Unless, of course, the strategy is to provoke the spider into releasing all his poisonous venom (into my head) before being victoriously picked up by hand by the Duke. Either way, i cannot help feeling like having the short straw here. But at least Yusuf found the whole experience really entertaining. 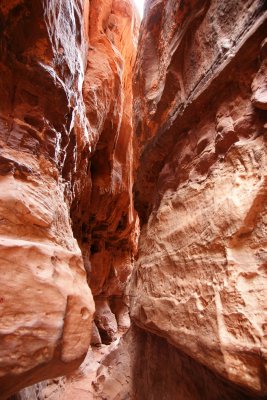 After what seemed like several hours of lazying around, we finally packed up to continue our journey through the desert. It was obvious that our programme was coming to an end and so Yusuf tried to stretch the breaks to fill up the day. On the other hand, we knew that after Wadi Rum we had to head back up north again and so from that point, any upcoming suggestion to have a break was met with a polite refusal.

Mere couple of hundred meters from our lunch spot we came across the first travellers upclose since leaving the Bedouin camp. And surprise surprise, they were Czech. Whilst the Duke tried to climb up a fragile looking sandstone arch, I chatted to the young family and found out that they were doing pretty much the same Jordan circuit like us, but unlike us, they had a driver. Waving them good-bye, the Duke finally made it up the mountain, and after positioning him into a sunny spot, I took a few pictures documenting this defeat of his fear of heights.

Of course, seeing Duke’s reluctance to do any rushed moves, Yusuf decided to show us how its done and climbed up, down and around a few times whilst the Duke tried to get down again. In the mean time, I took the opportunity to crawl up a small sand dune and indulged myself to a solitary run down. Unfortunately, whilst smaller sand dunes are distinctively easier to climb, they are also much faster to run down and so the couple of seconds long descend seemed disappointingly short. 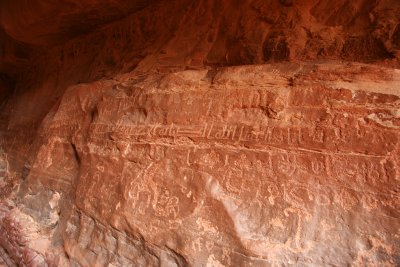 Petroglyphs in a narrow canyon in Wadi Rum

Whilst still firmly on the ground, we consulted our Wadi Rum map and concluded that our circuit through the desert is slowly but surely coming to an end. The last stop was a narrow canyon with yet other ancient carvings, which we hit approximately an hour after leaving the arch. On our way there, knowing that we are unlikely to complain about some extreme camel riding, Yusuf led us over giant sand dunes, which put our ability to stay on to top of the camel to the test.

At the canyon, we met the only other camel tour of our two days in the Wadi Rum desert. It was a group of Canadian girls with appropriately loud accents and we were really glad that not everyone forfeits this great way of experiencing the desert in favour of crowded and loud jeeps.

The interesting thing about Wadi Rum carvings is that they are all easily accessible. So much so, that if anyone decided to add a strange looking camel to the collection, it would be hard to tell the difference. At least for an amateur, that is. Enjoying being so close up, we took a little time to examine this sight, before setting off on the home run. 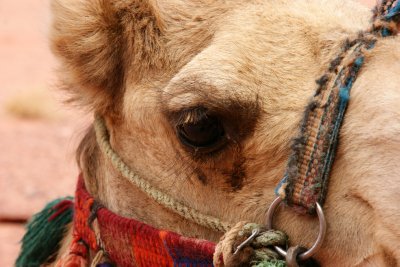 The closer we got to the Rum Village, the busier the traffic. Passing a giant sand dune with a cluster of jeeps and bored-looking drivers parked underneath it, we started to recognise places we saw the previous day and knew our Wadi Rum adventure is coming to an end. Despite seeing the village from quite a distance, it took a while before we finally arrived. Exchanging best wishes and good-byes with Yusuf and Ahmed, we boarded our decisively more comfortable car rental and drove off, direction north.

To this point, we were yet to see any crusader castle. All our previous attempts to patronise one had to be abandoned due to lack of time. This was about to change, however. Knowing that we only had one last night without a booked accommodation (last Jordanian stop: Dead Sea with pre-booked hotel), I checked the map for possible stopovers, only to find the king of crusader castles: Shawback, right on our way. Not entirely sure if Shawback sports anywhere to stay, we pressed on and after few hours drive arrived at the Shawback village. Imagine our relief when, after driving around for some time, we spotted a sign to the Montreal Hotel. 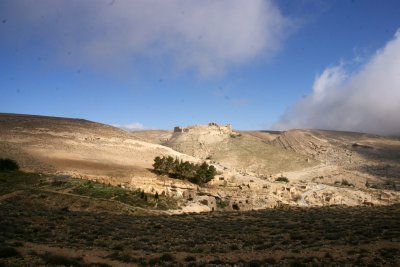 Shawback castle perched on top of a hill

Now, if you are in Jordan and want to see a spectacular yet completely under-visited crusader castle, go to Shawback. And when you are there, book a night at the Montreal Hotel. For 35 JD, this place is a bargain with the most spectacular views of the castle ruins perched on the nearby hilltop. Given the excellent location and value for money, we were shocked to find out that we were in fact the only people staying there.

Sufficiently knackered after couple of days ala Bedouin lifestyle, it was a bliss to have a long shower, washing off layers of the desert dust, before settling in the impressive communal area to watch the lit-up castle on the neighbouring hill and plot our last days in Jordan.